This papyrus presents scenes from the Amduat’s Tenth, Eleventh and Twelfth Hours

The treatise’s structure consists of three horizontal registers describing the Netherworld in its Twelfth Hour; on the manuscripts’ left-hand side, the scribe also included a Book of the Dead vignette alongside the Tenth and Eleventh Hour’s main episodes. These episodes are the first scenes in the top and bottom registers: respectively Book of the Dead chapter 148, The Goddesses on Snakes (Eleventh Hour), Atum and the Winged Serpent (Eleventh Hour), The Drowned (Tenth Hour) and The Punishment of the Damned (Eleventh Hour). Their function is to recollect the last phases of the Sun-god Re’s journey by applying the pars pro toto’s rule (a part of something taken as a representative of the whole)

The Twelfth Hour describes the end of the Sun-god Re’s nocturnal journey through the Netherworld. Here, the Sun’s rejuvenation process takes place inside the life-regenerating serpent anx-nTr.w (Life of the gods), as we see on the manuscript’s far right-hand side a beetle, Khepri, who represents the Sun-god’s rebirthed form. Hence, Re’s renewed form exits the Netherworld travelling through the (here missing) air-god Shu’s outstretched arms to be reborn as the sun disk at dawn. In the top and bottom registers, many deities witness the end of the Sun-god’s journey, praising the Great God and protecting him from the danger of his nemesis, the serpent Apophis. This hour presents the following scenes: The Twelve Worshipers, The Solar Boat, The Twelve Gods of Tow, The Snake of Rejuvenation, The Thirteen Goddesses of Tow, Khepri and Shu, The Twelve Goddesses with Snakes, The Ten Worshipers and The Mummy of Osiris

This manuscript is also known as the “Patchwork Papyrus”: gaps are filled with patches of residue fragments from other papyri dating to the New Kingdom (for the verso texts see sub-numbers to Cat.1786/001 – 003) (source Museo Egizio Papyri, research Enrico Pozzi, Shenali Boange) 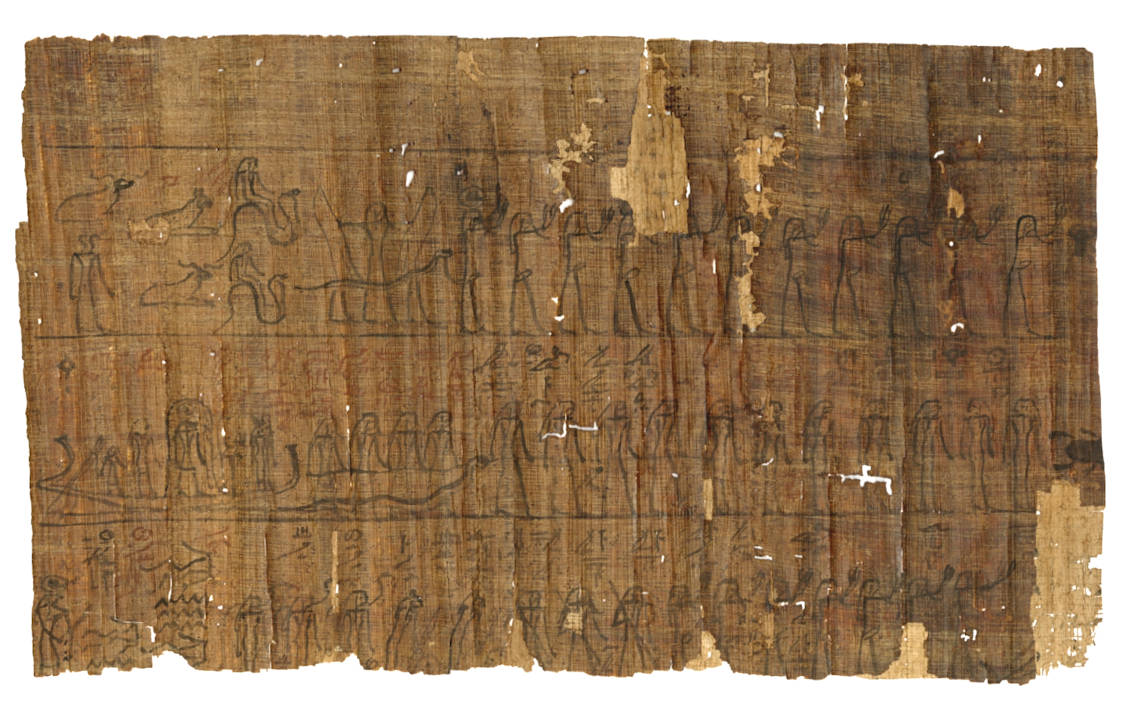