The Papyrus of Ani is a copy of the famous ancient Egyptian Book of the Dead, a collection of spells, prayers, and incantations to aid in the transition of the spirit of the dead into the afterlife. This copy was created for Ani, a Theban scribe, during the Nineteenth Dynasty around the year 1250 BCE. It is written in cursive hieroglyphics and superbly illustrated with richly detailed paintings of the stages of the afterlife

Among the numerous surviving copies of the Egyptian Book of the Dead, the Papyrus of Ani is considered the most magnificent in the quality of its lavish vignette paintings and the scope of its text

The stunning pictures offer a glimpse into the life of ancient Egypt in its rendition of the “Field of Reeds,” the awaiting paradise that reflects the living world, and into the complex and afterlife with its pantheon of gods rendering judgment and a menagerie of dangerous creatures. The Papyrus of Ani is an exquisite example of a key document in ancient Egyptian religion

Funerary papyrus
See the 37 frames in the British Museum

Book of the Dead papyrus for Ani

The Brtitish Museum houses the papyrus in 37 frames. Good photos of almost all of the frames are available on the BM’s website

For study and research I recommend using the zoomable pictures from the BM because they have a higher resolution than in the slider. Use the slider for the overview

Click here to view the 23.5 metres long papyrus
Please be patient, depending on your internet connection the slider may take some time to load (10mb)
Composed of photos © The Trustees of the British Museum

Here an example of the frames in the British Museum 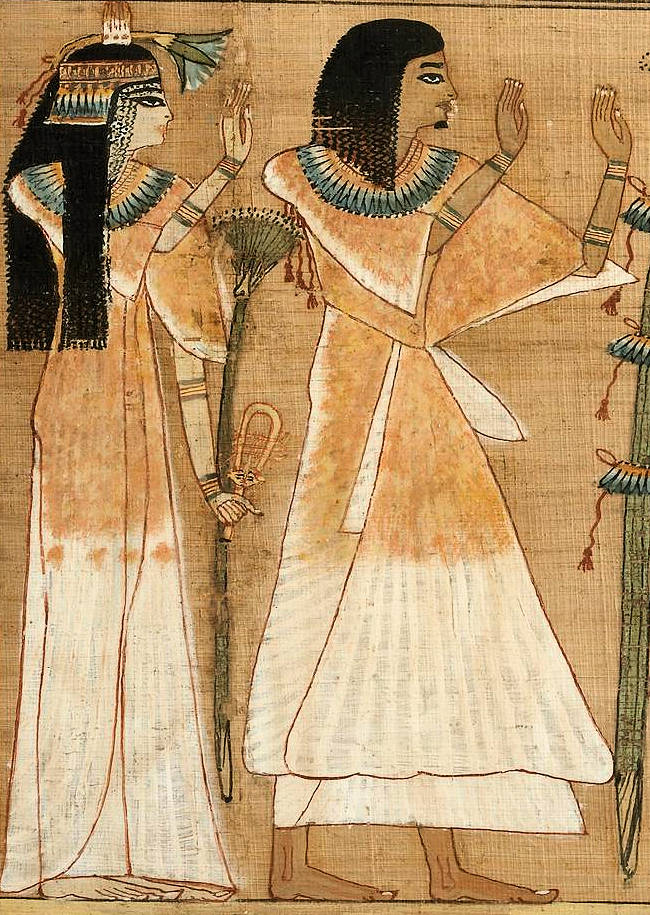 The Scribe Ani standing barefooted with his hands raised in adoration. He wears a close-fitting tunic covered with a white and saffron coloured garment, which reaches to his ankles; from the shoulders hang long fringes. On his head is a wig that reaches his shoulders, about his neck hangs a necklace, and he wears bracelets and armlets.

Behind him stands his wife Tutu. Mistress of the house, Chantress of Amen-Re. She wears a long plain linen garment that reaches to her feet, and her long, wavy black hair flows down from her head over her shoulders. A cluster of lilies, or lotus, lies above her hair, with their blossoms projecting over her forehead