A common theory is that Nodjmet had several children with her first husband Piankh: Heqanefer, Heqamaat, Ankhefenmut, Faienmut (a female) and, the most famous of all, the future High Priest of Amun/Pharaoh Pinedjem I. Nodjmet became Piankh’s most trusted confidant, and every time he had to fulfill his business in Nubia, the management of Thebes was left to her. When around 1070 BCE Piankh died, Herihor was proposed as his successor; Nodjmet, however, managed to keep her prerogatives marrying this man. Later, Herihor claimed “kingship” – although only inside the borders of the Temple of Amun at Karnak – Nodjmet effectively became his “queen”: her name was inscribed inside a cartouche and later she bore titles such as Lady of the Two Lands and King’s Mother. Source Wiki

Whether the above is correct is disputed. See the Second Nodjmet debate. See also the interesting article of Ad Thijs, Nodjmet A, Daughter of Amenhotep, Wife of Piankh and Mother of Herihor

Book of the Dead for Nodjemet – British Museum

Left part of the Book of the Dead papyrus for Nodjmet, length 416 cm, height 34 cm (left part)
The right part of the papyrus is kept in the Louvre and measures almost 9 metres. In Munich should be a part of 1.5 metres, but this part is lost or destroyed. The total length of the papyrus was around 14 metres
BD EA 10541, British Museum, London 59, Type BD.II.1, Niwinski
Photos British Museum © The Trustees of the British Museum
Panorama view VB 2022

Good photos are available on the BM’s website. For study and research I recommend using the zoomable pictures from the BM because they have a higher resolution than in the slider. Use the slider for the overview 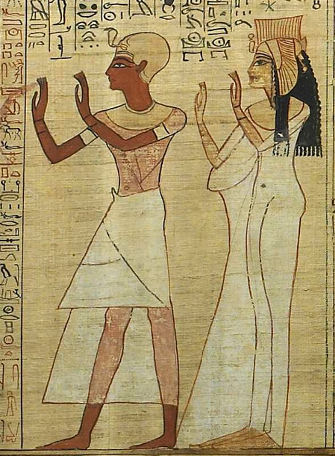 The Louvre Museum photos may be incomplete and it is not yet clear to me what order should be used, so the sequential view is partly guesswork. Unfortunately, the resolution also leaves something to be desired