Steward en overseer of the Taxes

This papyrus was prepared for the Tax Master and Steward Sethnakht. It reads from right to left and contains 3 large and 41 smaller vignettes. The text is divided into vertical sections by double lines. Each section encloses a vignette and its accompanying text

The three lines above each vignette name the deity depicted and ask for a specific boon on behalf of Sethnakht. The three columns below relate that in exchange for the boon Sethnakht has made an offering on earth to the deity. The long fourth column which follows each vignette contains miscellaneous material from various sources that was intended largely as a space-filler

At the extreme right, in the first section of the papyrus, Sethnakhte kneels in adoration of the symbol of the West, on which a falcon is perched. He is joined in worship by several registers of minor deities and sacred baboons.
To the left Sethnakhte adores Osiris flanked by Nephthys (on the left) and Isis (on the right). The accompanying text is composed of epithets and praises of Osiris

The primary text on this papyrus is reflects the longer version of a composition that has been numbered as Chapter 168 of the Book of Coming Forth by Day, also called the “Chapter of Offerings” or the “Liturgy of Offerings to Cavern-gods.” However, this text is usually found alone, rather than with other Coming Forth by Day spells, and is now considered by most scholars to be a separate text. Source MET 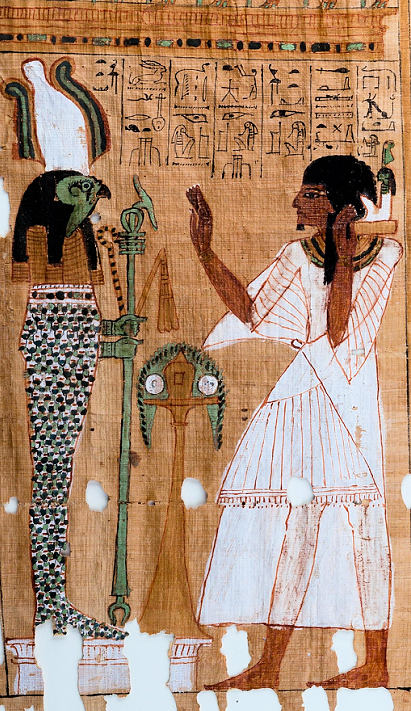 The Steward Sethnakhte standing before a falcon-headed form of Osiris-Wennefer-Khentyamentiu in a shrine topped with a frieze of uraei and feathers of truth. He raises one hand in adoration of the god and with the other steadies a small image of Maat, the personification of truth, on his shoulder